Joseph Pilates was born a in Germany in 1883. In order to recover from  childhood rickets, asthma and rheumatic fever, he began a life long study of physical fitness. He explored body building, kung fu, gymnastics, and yoga.  He transformed his body , so much so that the was able to work as a boxer, a circus-performer, and a self-defense trainer at British police schools. When World War I broke out , he was interned by the British because of his Gernman Heritage. It was during this period, while rehabilitating fellow internees, that he began teaching and refining  the exercises that we now call "Pilates".

I started taking private Pilates classes in order to re-align my body from years of body suit and puppetry work. I was so impressed by Pilates benefits I decided  to become an instructor. I received my mat certification through Body Harmonics in Toronto and my reformer certification through the Physical Mind  Institute Vancouver. My areas of specialty include Pilates for osteoporosis, Pilates for men, Pilates for scoliosis and Pilates protocols for rehabilitation. 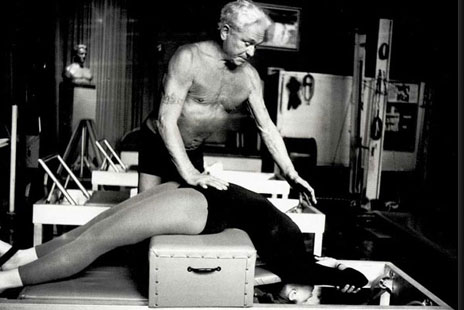 Joseph Pilates at work in his New York Studio